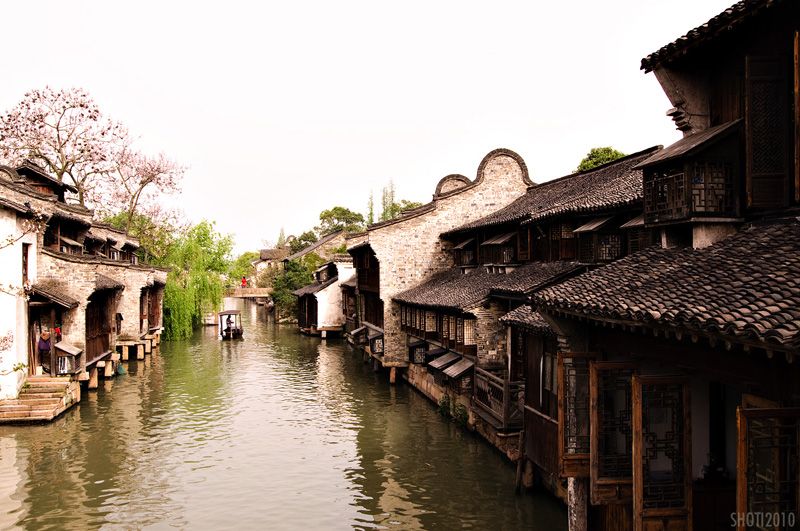 Life along the canals

Posted by shoti (somewhere in, China) on 4 May 2010 in Lifestyle & Culture and Portfolio.

After taking our last Cuban guest to Shanghai Airport, I headed to the south bus terminal of Shanghai to buy tickets for Jiaxing. Then after about an hour and a half, I arrived at Jiaxing. Ate my lunch in a flash, then bought a ticket for Wuzhen（乌镇）. The place wasn't so far from Jiaxing but it took the bus about an hour to arrive at the bus terminal of Wuzhen, had many stops along the way and the driver wasn't as furious as those I've seen in Fujian.

The weather wasn't so cooperative while I was there but I think I managed to get some few keepers(for me). This town is very attractive, albeit too much touristy. The local tourists were just too much, the town doesn't look authentic with them. It felt more like a park than anything else. There were hundreds of them, scattered in the streets, maybe even thousands. Still, it's good for photos. There are some places where you could learn bits about the history of the place like the Paste making factory, Foundry, Mao Dun's former residence and many others. They provide information in English but it's much better if you can read and understand Chinese.

Grand view of the city and its canals, the Venice Chinese!! Very nice shot, like a lot. Good day.

@Tede: that's my title for my next post on this place! haha ok, not exactly those words but similar. thanks a lot for visiting Tede, have a nice day ahead

No tourists here to be a pollution in the image, seems so serene and i like a lot this very delicate figure inside the wooden boat.

Like a Venice of the orient! Great shot Edwin!

Wow. Parang nasa Italy lang. Except you don't hear the sound of classic italian music in the background. The blown out sky is a little distracting but I take it the weather didn't cooperate. Good shot still.

This place looks amazing! So original and unspoilt, and very unique. A nice capture IMO!

@Ian Smith: glad I was able to made it look 'unspoilt' . any place that's blessed by the Chinese tourism authority will cause it to be flocked heavily by Chinese tourists and foreign as well. causing for the local culture and traditions be lowered to commercialism.