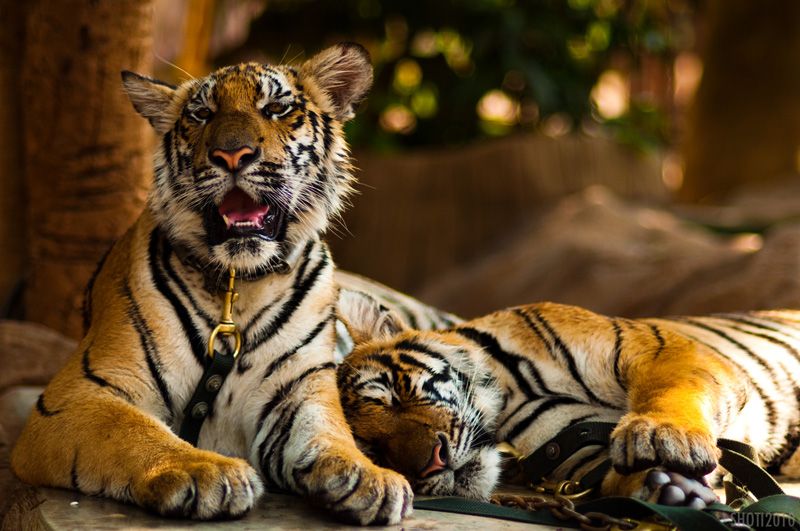 The Plight of the Tigers in Tiger Temple

Posted by shoti (somewhere in, China) on 14 April 2010 in Animal & Insect and Portfolio.

"The tigers are poorly housed and badly maltreated to make them compliant and perform for visitors."
-Tiger Temple Truths (click the name for more information)

Warning: In the past, reports from Tiger Temple volunteer workers released that the tigers where maltreated and abused by the Abbot of the temple and his staff. A shortly released report from the British conservation group Care for the Wild International (CWI) reveals disturbing evidence of animal abuse and illegal tiger trafficking at the temple. Also, when you take a "special" photo with the Tigers, they seem incredibly drowsy, as if they've been drugged, however, drugging any animal everyday would surely kill it, and a drugged tiger would not be moving at all, plus it would also look like it was dying. The easiest way to explain these tigers' docile behaviour is that not only have they been hand-raised by the staff and monks since birth, technically speaking they have been conditioned (think Pavlovs' dogs) to go and sleep in the canyon everyday as part of their routine. Tigers are also nocturnal, and sleep 16-18 hours per day, plus they are fed 4kg of food before being brought into the canyon during the hottest part of the day (1pm - 3:30pm). So there you have it. No sedation, just strict routine. They are still tigers though, so if you don't follow the instructions you are given, you put yourself and others at risk.
-Wikitravel.org

When we were there, the tigers were indeed very drowsy. I've read about it in wikitravel so I thought it was just that the tigers love sleeping too much. But after reading some things in Tiger Temple Truths, I've started to think otherwise. I've read that the tigers were caned if they don't follow or get aggressive. Indeed, I've seen some strange marks in one of the tigers but we didn't paid much attention to it, my brother said it was just the other tiger's tail mark (of course that was just a joke).. Looking back, that tiger might've been caned by the staff or 'monks' there.. sad

beautiful capture , the same wonderful light and colors from the previous picture !

The one who protects, the one who can sleep quietly. A couple, (beautiful) tigers or not, that's touching attitude...

A true marvel, a splendid shot of this beautiful animal. Good day.

A very beautiful capture of this couple of beautiful tiger, like their different attitude. Warm Colors and light are really very pleasant.